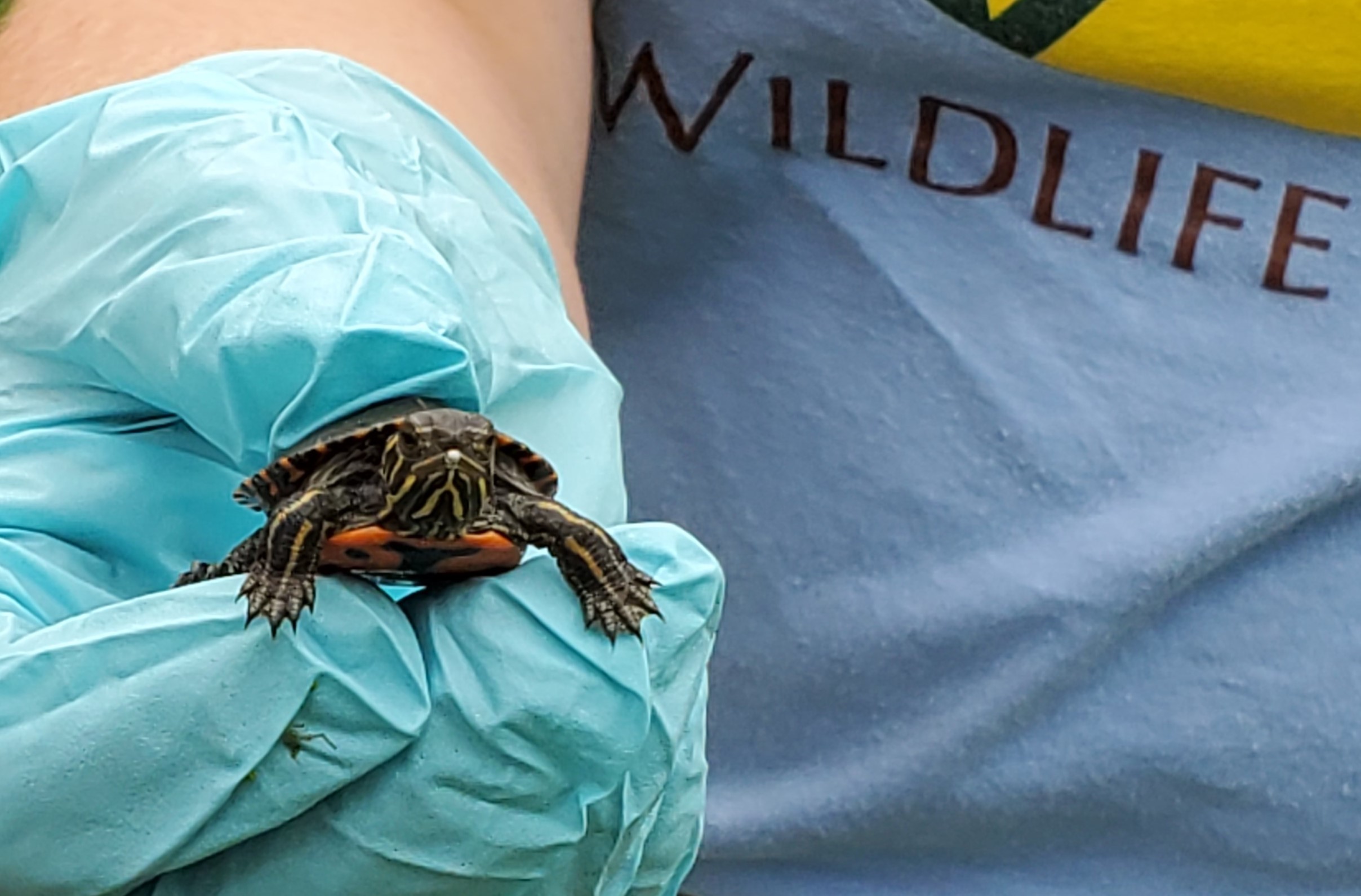 DCHS’s Wildlife Center staff found and nurtured hope for one turtle’s offspring over the summer.

In early June, a caring member of the public found an injured Western painted turtle in the road and rushed her to Dane County Humane Society’s Wildlife Center. The finder didn’t realize the turtle had already passed away.

But this sad event turned out to have a silver lining. Wildlife Center staff discovered the turtle was gravid (or pregnant) with 15 eggs.

“We will incubate any eggs in case they are still viable,” says Paige Pederson, Wildlife Center Operations Supervisor.

Our licensed rehabilitators committed to retrieving the eggs with the hopes of incubating and hatching them at the Wildlife Center, and then returning the hatchlings back to the watershed where their parent had lived.

As staff waited for the eggs to hatch, they monitored the temperature and humidity levels while doing their best to be patient. Painted turtle eggs can take 60 to 90 days to develop and hatch.

After two months in incubation, the eggs began to hatch at the end of August, revealing Western painted turtles no larger than a quarter. Staff later performed a physical exam, which included ensuring the soft spot on the underside of their shell (known as the plastron) had hardened.

Paige says the physical exam the hatchlings received is the same exam given to adult turtles, just “on a really small scale.”

Fortunately, 10 of the 15 harvested eggs developed and hatched.

“In the wild, not every egg will hatch,” says Paige, citing a variety of reasons, including genetic, environmental, and natural predation. “In the case of this clutch, it is also possible the other eggs were damaged when their parent was hit by a car,” Paige says.

“While painted turtles are a common species in Wisconsin, they still face threats of injury and disease from human-related activity, such as vehicle collisions and habitat loss and fragmentation,” says Paige.

“Turtles are slow to reproduce, with many not reaching maturity until 10 to 20 years of age,” Paige adds. “Every painted turtle that can be rehabilitated and returned to their native territory is critical to maintain a healthy population of these wonderfully colorful native turtles.”

Painted turtles prefer to live in marshes, ponds, and other wetlands with dense aquatic vegetation. The parent turtle, for instance, lived in the Lake Waubesa watershed. In September, the 10 hatchlings were released in Babcock County Park in McFarland to venture out on their own.

In addition to the Western painted turtles, the DCHS Wildlife Center has successfully incubated the eggs of many snapping turtles – Wisconsin’s largest and heaviest turtle species.

The Wildlife Center has released a total of 82 hatchlings from the incubation program this year, marking the highest successful hatch rate to date. This number reflects a 54 percent hatch rate, which has dramatically increased since 2014, when the hatch rate was less than 5 percent.

“This continued success is the result of honing the incubation process and settling on a system that mimics natural conditions well for the eggs’ development based on temperature and humidity,” says Paige.

The Wildlife Center rehabilitates between 70-100 turtles annually. In addition to painted and snapping turtles, other turtle species commonly admitted for treatment include map turtles, softshell turtles, and Blanding’s turtles, which are a vulnerable species in Wisconsin.

If a turtle needs help crossing the road, move the turtle in the direction it’s headed. Turtles are determined and directional, so if you put them on the side where they started their journey, they’ll try to cross the road again. A turtle may be moving away from a water source to lay eggs, searching for a mate, or looking for a better habitat.

Do not help hatchlings in the wild move from the nest to the water. Turtles imprint on their nest site, meaning when female turtles are older and ready to lay their own eggs, they’ll return to the site. Letting turtles make their own way from the nest will increase reproductive success when they’re adults. Hatchlings can be helped across the road if necessary; otherwise, they are fully independent when they hatch.

Turtles are slow pokes? Actually, they can travel faster than stories describe. They can pick up the pace when they need to, and their size and coloring can help them disappear into nature.