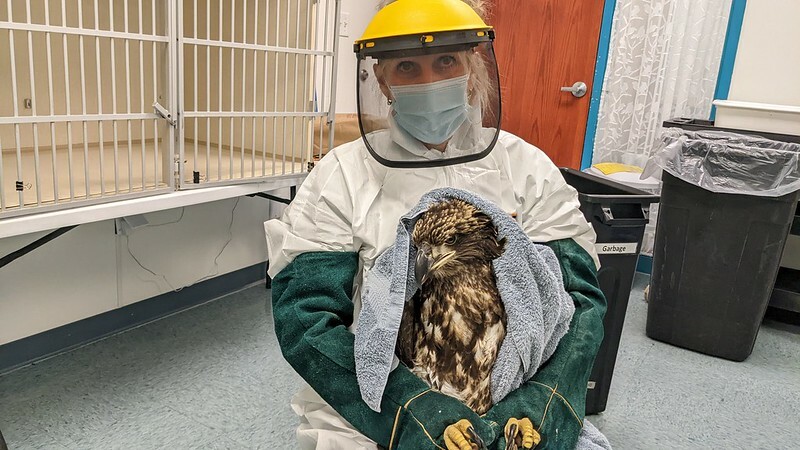 Ten years ago, Dane County Humane Society’s (DCHS) Wildlife Center program may have seen only one or two eagles admitted for rehabilitation, and it felt like a shock when any of those birds arrived at our doors. Five years later, eagle admissions were still in the single digits, but each year it seemed that more and more were coming in.

As of today, over 100 bald eagles have been admitted to DCHS’s Wildlife Center. We also set a new program record in 2022 with 23 individuals being admitted. Check out the table below with our historical eagle data since 2013.

Why are we seeing so many more now than we did in years prior? While the true answer may never be known, staff suspect that it has to do with the following reasons:

Bald eagle populations have increased nationally over the past 50 years, which means more birds are present. This could generate higher frequencies of human-caused injury or mortality.

In Wisconsin, the Department of Natural Resources (DNR) performs aerial surveys to look for eagle nests. Historically, results have ranged from 108 occupied eagle nests in the early 1970s to 1,695 by 2019. That’s an amazing number considering parents lay 1 to 3 eggs per season!

2. More people willing to help with rescues and transport

DCHS’s Wildlife Center staff have an ongoing goal of strengthening professional relationships with local wildlife enforcement agencies, such as the Wisconsin DNR, U.S. Fish & Wildlife Service (USFWS), and Dane County & Madison Public Health Animal Services. When more officers get to know us, our work, and our services offered in the community, more folks are willing to help with rescues and transport.

3. Eagles are susceptible to many kinds of illness and injuries

Uniquely, bald eagles in our state are at risk of contracting Wisconsin River Eagle Syndrome (WRES) – a hepacivirus that causes eagles to display abnormal neurological symptoms and succumb to a high rate of mortality. Eagles are also susceptible to other severe ailments such as lead toxicosis, Avian Influenza, and West Nile Virus.

What are the main reasons that bald eagles are admitted to DCHS’s Wildlife Center?

As you can see in the table below, most circumstances are unknown. However, in the last 10 years, 38% (n = 41) of all individuals were known or suspected to be hit by vehicles.

Bald eagle populations have nationally rebounded from a time when they were listed as critically endangered in the United States. Eagles have had special protections as part of the Bald and Golden Eagle Protection Act since it was passed in 1940, but the introduction of environmental contaminants, such as DDT (Dichlorodiphenyltrichloroethane), caused bald eagle populations to crash.

DDT is an insecticide that was widely used to reduce mosquito populations for malaria control and as pest control for agricultural practices through the 1950’s. It was later found to bioaccumulate in fish, a main food source for bald eagles. DDT would absorb into bald eagles' bloodstreams, affecting their reproductive systems, and causing their eggshells to become thin and break when laid. Hatchling bald eagles were rare until re-introduction programs aided in their recovery.

Now, an estimated 316,700 individuals reside in the country, with Alaska having the highest state population.

Where are they coming from?

Where do bald eagles admitted to DCHS's Wildlife Center tend to come from? Regulations mandate that rehabilitators only admit animals from the state(s) in which they are licensed and registered for their activities. Here’s where we’ve seen eagles come from at our facility in the state of Wisconsin:

It’s incredible to see the assortment of locations where these eagles came from. It goes to show how far and wide our program reaches to help animals in need.

TOP PHOTO: Volunteer Wildlife Center Assistant Maarit Spelman holds an immature bald eagle for an initial physical exam. Maarit says: "This past year, I have had a unique and rare opportunity to train and get up close to these majestic birds! ... Every single time I handle or hold an eagle, my heart is pounding with excitement and pure happiness. I have an enormous amount of respect and admiration for them!"