Dane County Humane Society | From Rough Past to New Beginning Thanks… 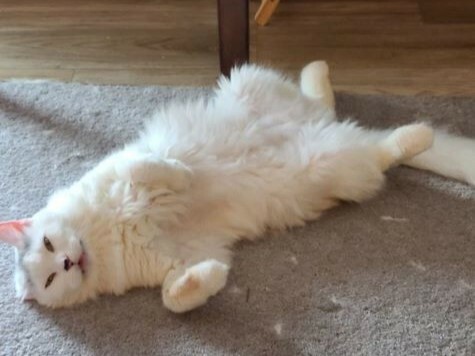 Eddie was among nearly 30 cats surrendered to Dane County Humane Society (DCHS) from one overwhelmed household. Because of the sheer volume of cats, it’s likely none of them received essential preventative care, and some of their medical needs were missed, like with Eddie.

Thanks to generous supporters like you, DCHS is able to address immediate dental and medical issues that cause discomfort and pain for animals in our care. When you give this #GivingTuesday, your gift has DOUBLE the impact for sick and injured animals in need thanks to our generous matching gift challengers.

When the family surrendered the cats, they referred to Eddie as the “mean” one, so staff braced themselves. But when our Admitting Technicians first met Eddie, he was terrified and had shut down. He didn’t respond to being touched, trying instead to make himself invisible. Upon examination, they found eight-year-old Eddie was suffering from severe dental disease throughout his mouth, including heavy tartar, gum recession, and some loose teeth. His dental issues caused saliva to accumulate in his fur, creating a crusting around his chin and lower lip. Eddie also had infections in both ears, and his outer right ear covered his ear canal, causing his severe infection.

During his exam, our team comforted Eddie and gave him gentle pets, which he leaned into as they gained his confidence. Eddie’s “mean” behavior was likely a reaction to the extreme pain he was feeling. Eddie was scheduled for surgery as quickly as possible, and he was given pain medication to make him comfortable until then.

Two days later, our Animal Medical Services team cleaned Eddie’s teeth and extracted seven of them. They found that five other teeth were already missing. While he was still under anesthesia, they surgically clipped Eddie’s right ear flap because the overhang prevented normal air circulation in his ear canal, which led to the severe and painful ear infection.

The procedures were a success, but DCHS staff had another concern: Eddie was barely eating. Our veterinarians thought it likely his lack of appetite was caused by the stress he was feeling at the shelter and ongoing pain from his extensive dental work. They put him on appetite stimulates to try to help.

Days passed, but there was little change in his appetite. Our veterinarians inserted a feeding tube so Eddie could get a liquid diet, which provided him with nutritional support while he became more comfortable with his surroundings and recovered from his medical procedures. A few days later, Eddie began eating well on his own, and his behavior even changed. He wasn’t the so-called mean cat staff had heard about. He was sweet and asked them for attention and pets.

After our veterinarians removed the feeding tube, Eddie continued to eat well and stay hydrated, and he remained friendly and bright. By late June, Eddie was medically cleared for the next part of his journey: finding a new home.

Drisana and her wife, Claire, wanted to add a senior cat to their family. “We were looking for another senior cat to bond with our 9-year-old cat, Marcie, who gets bored while we are gone at work,” says Drisana. “So, we stopped into the Humane Society one Saturday afternoon just to see what cats were available there."

“We didn't look ahead and just intended to browse, but when we got up to Eddie's enclosure, he was being so sweet and friendly – he was meowing at us and rubbing against the glass. We knew we wanted to meet him, despite the warning on his info sheet that said he had some medical issues,” Drisana recalls.

“So, Sunday morning we got in line outside the Humane Society before they opened,” Drisana says. “Eddie was very shy in the meet and greet, but we didn't hold that against him, and once we heard about his rough past and resilience – we decided to take him home.”

Drisana and Claire adopted Eddie in mid-July, nearly three weeks after he was made available for adoption. “Once we got Eddie home, he flourished. He only hid for a short amount of time before he was rubbing against us for attention and playing with toys,” Drisana says.

“We were told at the shelter that he refused to eat much there, but he has a healthy appetite for us. He's such an affectionate cat! His favorite things to do are sleep in ‘his spot’ on the arm of the couch, play with toys, and run around the condo with his new sister,” she adds.

Thanks to your support, animals like Eddie can get the care and support they need to move from a rough past to a happy beginning with their new family. Give today and DOUBLE your impact up to $28,500 thanks to our generous matching gift challengers: Bob Bartholomew, Deb Walton, Clay Rehm and Giannina Milani-Rehm, Joyce & David V.G., and the Pamela B. Phillips Memorial Gift. 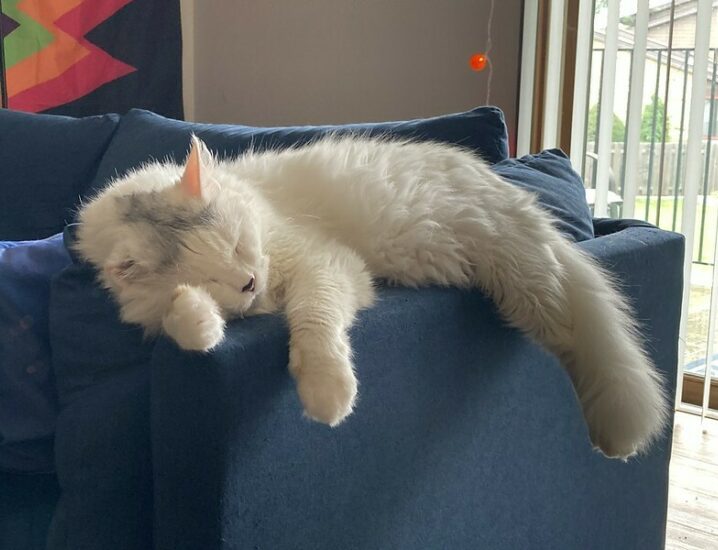 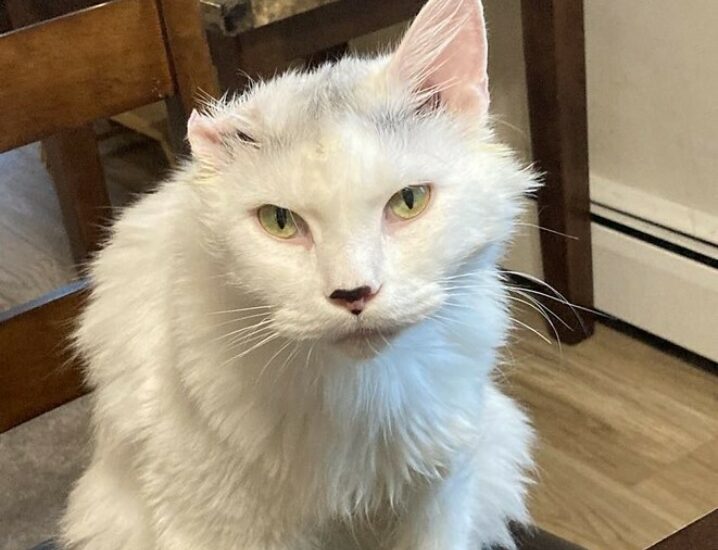