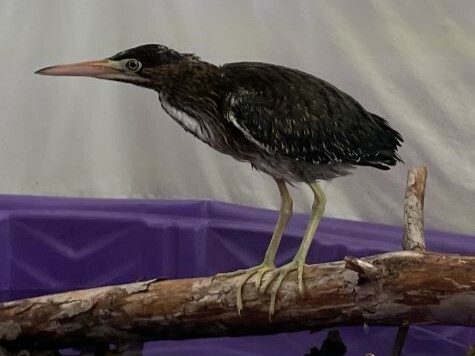 Green herons are unique and fascinating birds. Their movements and sounds are like small dinosaurs with beautiful green and red-brown feathers. We see only a few of these birds each year at Dane County Humane Society’s Wildlife Center and we see young green herons, especially those that are still in the nest, even less often.

During one of the severe storms in late July, a nest with three hatchling green herons was found on the ground in Verona, Wisconsin. All three were in very poor condition—critically dehydrated, thin, anemic, and suffering from internal parasites. The brightest of the bunch additionally had head tremors, which we were concerned was either from trauma or Highly Pathogenic Avian Influenza (HPAI).

Because of our generous community, DCHS’s Wildlife Center can provide specialized care and treatment to wild animals in urgent need. When you give this #GivingTuesday, you can DOUBLE your impact for sick, injured, or orphaned wildlife thanks to our generous matching gift challengers.

We submitted an HPAI test and provided supportive care, including subcutaneous fluids, heat support, and tube feeding. Two in this group were unfortunately too far gone and passed within the first day despite our efforts, but the brightest one started showing great strides and improvement with our care.

To our relief, the HPAI test came back negative. The head tremors were likely caused by hypoglycemia (low blood sugar), and they improved drastically as the heron’s weight increased.

This young survivor stayed in an incubator for the first few days as its condition stabilized, and we provided its first meals four times per day through tube feeding of a specialized piscivore (fish-eater) formula with added fish oil. As it improved, we reduced the daily tube feeding and fluid support, and we gave it a perch and started offering live fish. Soon enough it was bright, feisty, and interested in eating food on its own!

Our staff and interns made frequent trips to buy live minnows, since this growing heron ate 20-30 minnows each day. It began grabbing fish the moment a fresh dish of water and minnows was placed in the enclosure—a dramatic change for the better!

Once we were certain the heron had gained weight and was able to regulate its own body temperature, we turned off the incubator’s supplemental heat and moved it to a small outdoor enclosure. This enclosure was a big upgrade, many times larger than the size of the incubator with lots of vertical space. We added sheets to the walls to prevent feather damage, created areas for this bird to perch and climb with fresh branches, and added a shallow kiddie pool to the cage with logs and live minnows to allow this heron to practice hunting in a larger space.

We hid a camera in the branches of its cage to record video of the bird, and to verify it was practicing normal behavior—including successfully catching those minnows in a more challenging environment! The bigger pool and added logs allowed the heron to perch and wade, but they also gave the minnows places to swim and hide, creating a new challenge for our heron.

The heron then graduated to the final step of care at DCHS’s Wildlife Center: a large enclosure to practice flying and build strength before release. This bird would need to migrate by the end of summer as far as Florida and potentially as far as Ecuador in South America!

Once we were sure the bird had the skills necessary to survive in the wild, it was time to let it go. We researched the best release locations, where it could have an appropriate habitat if it decided to stay put for a while. There were lots of green heron sightings at a few small ponds on the west side of Madison, so that seemed like the perfect place for this bird to go.

Staff member and licensed wildlife rehabilitator Galen Cotting released this bird on a nice sunny day. He placed the carrier next to the water’s edge and opened the door…and the heron shot out and flew across the pond, landing in the trees a few hundred feet away. It looked around the area for a few seconds, got its bearings, and then dove down into the reeds, disappearing out of sight.

Galen recalls, “With how small and frail the heron first appeared when it originally came in, I was delighted to see it soar across the open water and quickly make its way to a new home.”

Your generous support allows DCHS’s Wildlife Center to provide specialized care and treatment to a wide variety of wild animals across hundreds of species. Give today and DOUBLE your impact up to $28,500 thanks to our generous matching gift challengers: Bob Bartholomew, Deb Walton, Clay Rehm and Giannina Milani-Rehm, Joyce & David V.G., and the Pamela B. Phillips Memorial Gift.