Dane County Humane Society | You Can Help This Pelican & Swan While… 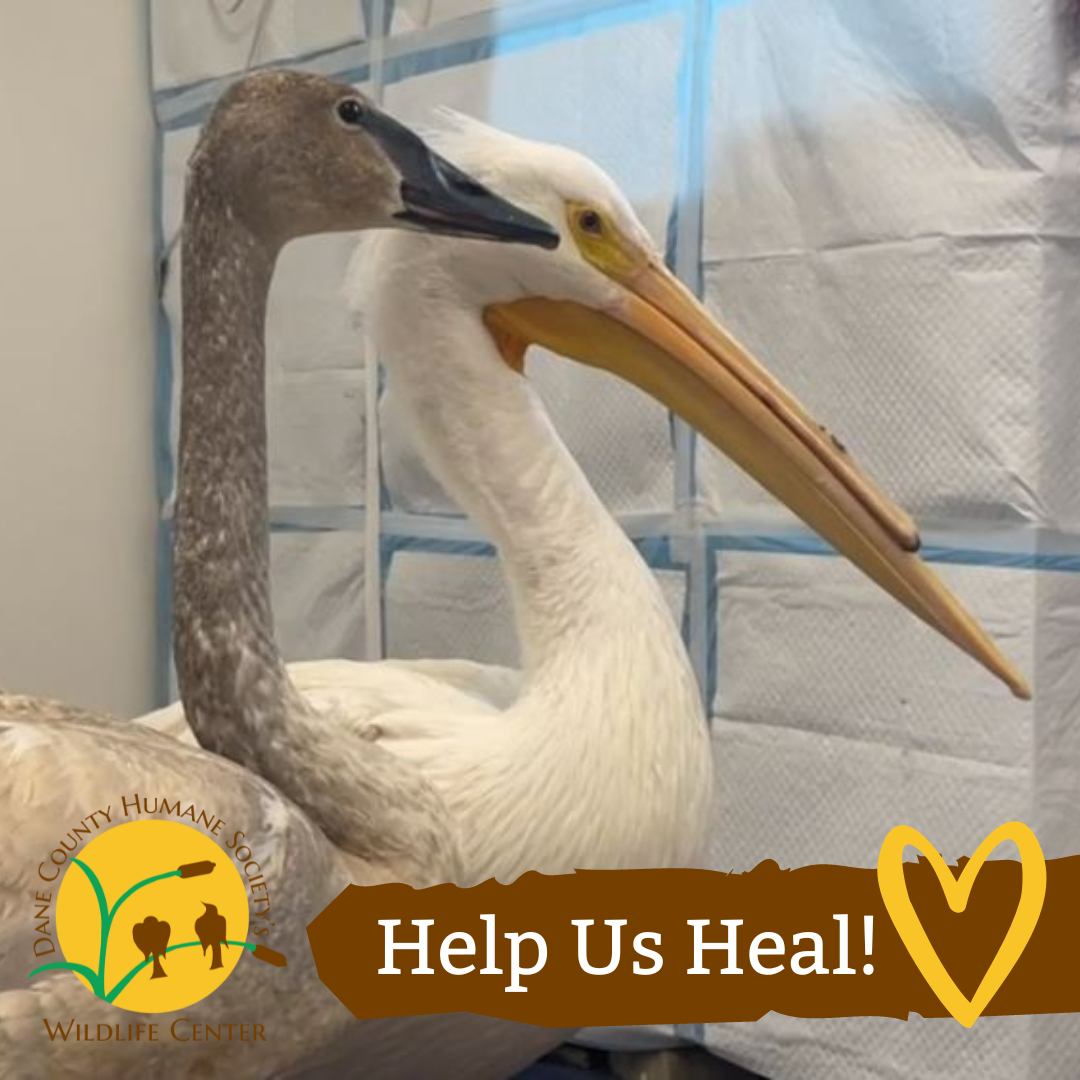 Thanks to you and other generous donors, we reached and exceeded our goal!

While the goal for Dane County Humane Society’s Wildlife Center is to rehabilitate wild animals and return them to their natural habitat, some patients are admitted with injuries that are too severe, meaning they can no longer survive in the wild. Our team is currently caring for two aquatic birds in this exact type of condition: a majestic American white pelican and a mischievous trumpeter swan. They will be in our care long-term until we find permanent placements for them with a licensed captive wildlife facility, AZA accredited zoo, or bird sanctuary.

It could be another month or more before we find a facility for these two birds. DCHS’s Wildlife Center is a private nonprofit that receives no federal or state funding, and we are faced with a financial challenge to feed these birds because of their high cost of food and their very healthy appetites.

But you can help!

Please help us raise $2,500 to cover the cost of food, care, and treatment for these two birds until we can find them placement.

The pelican was admitted to DCHS’s Wildlife Center on November 15, 2022, after he was found in the snow in Vernon County, unable to fly. The finder worked with DCHS’s Wildlife Center to safely capture the bird and transport him to our facility for care. Upon arrival, it was clear this pelican needed help. He was thin and dehydrated, had parasite infections, a severe puncture wound on his shoulder, multiple rib fractures, and a beak fracture.

A few weeks after the pelican arrived, the Wildlife Center admitted a juvenile trumpeter swan after he was found alone for multiple days in rural Crawford County. This swan suffered from dehydration, eye trauma, lice, puncture wounds on his feet, a fractured bone in his wing, and lead toxicity.

Over the past several weeks, licensed wildlife rehabilitators have been working to help stabilize the pelican and the swan while they mend. Since his arrival, the pelican has undergone multiple treatments for his injuries; his shoulder and ribs have healed, and his parasitic infections are under control. The swan has undergone successful treatment for lead toxicity and many of his wounds have healed.

While there have been many reasons to celebrate, there have also been some complications.

The pelican’s beak fracture refused to heal. To prevent further complications and infections, our licensed rehabilitators ultimately made the decision to amputate the fractured area. While this procedure was done for the health of the pelican, it also meant he would be unable to return to the wild. Wildlife rehabilitators also determined the swan was unable to return to the wild. Prior to arriving at DCHS’s Wildlife Center, the swan had suffered a wing injury that had healed improperly. This injury makes it impossible for him to fly and subsequently migrate.

The goal is now to give them both the best possible care while they wait for placement opportunities. In the meantime, we need your help!

These are large birds, and they eat like it! The pelican eats multiple live fish – about 6 to 12 inches in length – each day and the swan receives fresh greens, bugs, and grains. While both birds suffered rough beginnings, they continue to thrive in our care. This unlikely pair have been housed together and co-exist peacefully. The roommates spend their days foraging for their diets, preening their feathers, exercising in their enclosure, resting, healing, and occasionally stealing each other’s food.

Please help us raise $2,500 to cover the cost of food, care, and treatment for these two birds until we can find them placement.

To help, you can make a donation online by clicking the “Donate” button below. You can also mail or drop your donation at Dane County Humane Society’s main shelter (5132 Voges Road, Madison, WI 53718). Checks should be made payable to DCHS with “Heal” in the subject line.

DCHS's Wildlife Center is funded by generous donations from our community. Any additional funds raised will be used to continue the work our Wildlife Center does every day to help injured, orphaned, and sick wildlife from throughout the Greater Madison region.