Helping Her True Personality Shine Through 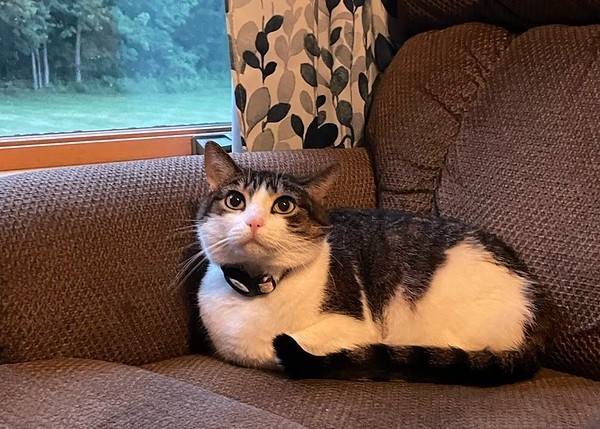 Shy Piper spent most of her time at DCHS hiding, but thanks to extra attention from staff, she became more comfortable at the shelter and found a new home where her personality could shine through.

She wouldn’t come out of her hideaway box. Not for food. Not for water. Not for her litterbox. Piper, a shy cat waiting for her new home, was very scared by the shelter setting.

Some animals who come to Dane County Humane Society (DCHS) need a little extra help, whether that’s extra training, special medication or treatment, or a quiet living space. Staff and volunteers at DCHS monitor the animals who come through our doors and make special arrangements where needed. This extra care and comfort are made possible by the support of our incredible community.

When you give before September 30th, you can double your impact up to $10,000 thanks to a generous matching gift from Linn Roth and Jean Martinelli.

Piper was one of those animals who needed a quiet space. For the first month she stayed at DCHS, she lived in a condo in the Adoption Center.

“It’s a place where we put cats who need a little more peace and quiet,” explained Hollis Coffin, a Shelter Resource Counselor at DCHS. Much of Hollis’s time was spent in the Adoption Center as he sent pets to their new homes after finding great matches for potential adopters, so he was able to keep an eye on Piper.

“Even there, she was too afraid of the hustle and bustle of our daily activities,” he said. “She would spend all day—from opening to closing—in the very back of her hideaway box, pressing her body so far back, potential adopters would think her kennel was empty.”

Hollis felt a special connection to Piper because she reminded him so much of his own shy cat. “Each day when I came in, I would spend a little time with Piper, checking in on her, talking to her, and petting her,” Hollis said. “She wanted affection—she would nudge into my hand as I pet her, and after getting to know me, she would even roll over to show me her belly and purr. But she would only do that from the safety of her box. Once I went away, she went right back to her usual wide-eyed, terrified stare.”

He knew the Adoption Center wasn’t the ideal place for Piper, so Hollis recommended she be moved into a staff office as soon as one was available.

“We will sometimes move cats into offices to help them become more familiar with people being around,” Hollis explained. “My hope was if we moved Piper into an office environment here in the shelter, she would feel more comfortable.”

Once she moved into a staff office, Piper felt a little more settled, though she would still find places to hide.

“One night while we were closing, a member of care staff couldn’t find Piper in the office,” Hollis remembered. “We searched high and low for her, worried she may have slipped out the door or gotten herself stuck. We found her in an impossibly narrow space behind one of the filing cabinets. As it turns out, that was one of her favorite places to hang out.”

But Piper’s officemates were patient with her.

“Over time, she started to get more comfortable with her new friends in the office,” Hollis continued. “She was still hiding, but she was doing it under chairs and in her cat tree—no longer cramming herself behind objects or into boxes. It was a massive improvement.”

There were even a few moments when only one staff member was in the shared office and the rest of the shelter was quiet after closing that Piper came out to ask for pets!

With these huge pounces forward, all Piper needed was someone to see past her initial shyness to appreciate her precious personality.

Although she and her husband weren’t looking to adopt a new cat, Jennifer Lavender Braun came across Piper’s picture on DCHS’s website. It was love at first sight.

“Piper’s wide eyes and sweet face stole my heart instantly. I admired her and hoped she’d find a home soon,” said Jennifer. “But each time I went back to the website and saw she was still there, I felt more and more like we were meant to be together.” Jennifer and Erik knew they had to come to the shelter and meet Piper.

“By that point, we knew we wanted to bring her home,” explained Jennifer. “We brought a carrier with us and were ready for this sweet girl to join our family. We were happy to hear right away that it sounded like Piper would be a good fit for our home.”

Hollis was working in the Adoption Center the day Jennifer and Erik visited. “I had the privilege of working with Piper’s adopters to send her home,” he said. “I was so excited to see her leave the shelter, knowing she would be going into an environment where she would be able to bloom into a more confident cat.”

Jennifer added, “When we met her, she was hiding under a chair. She had huge eyes, and was clearly nervous around us but didn’t run away. She let us pet her and give her some attention. When asked what we thought, we knew we couldn’t say no to that face!”

Piper has since blossomed in her home.

“She has made so much progress,” Jennifer said. “From our shy timid girl who would hide all the time, now she follows us around and meows for breakfast first thing most mornings. During the day she enjoys watching birds and other wildlife from the window where she can make herself comfortable. In the evening, she loves to have some time running around the living room playing.

“Wand toys are her favorite, and she loves to show off her hunting skills,” Jennifer continued. She will jump, flip, plop, and run all over the room to catch her favorite toys. After that, she’s ready for some head scratches and purrs loudly to let you know she approves. If she’s feeling extra affectionate she’ll ‘stop, plop, and roll,’ where she plops down and rolls over to show you her belly. A few gentle belly rubs are accepted with plenty of loud purrs.

“While she still has plenty of places to hide and get some peace and quiet,” Jennifer said, “we’re so happy to see her personality shining through each day!” 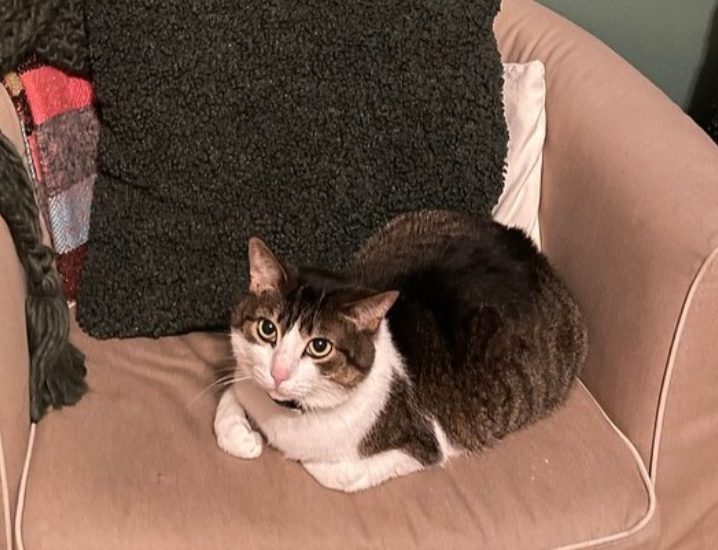 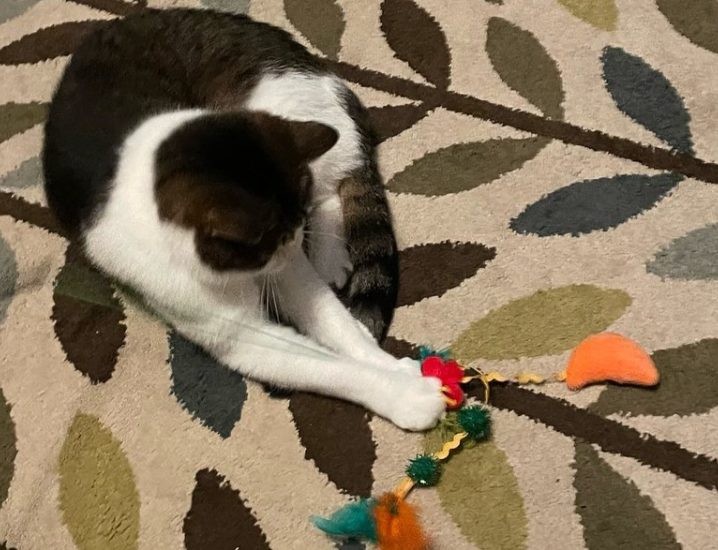 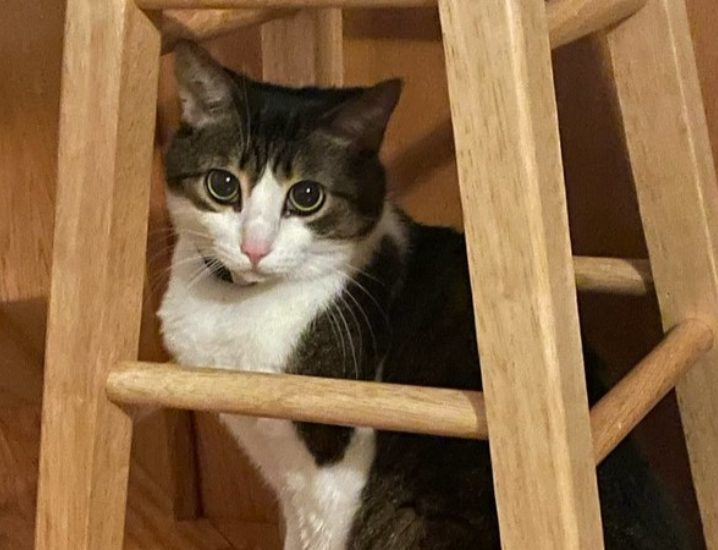 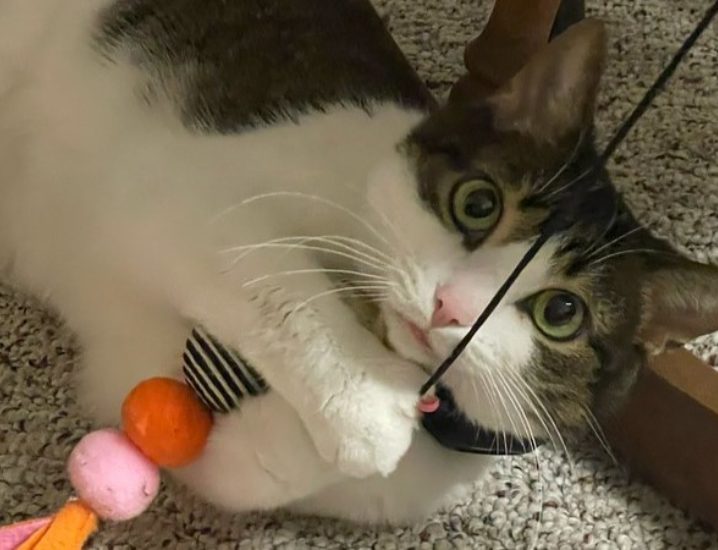 With your generous support, DCHS helps thousands of animals like Piper find homes where their unique personalities can shine through.