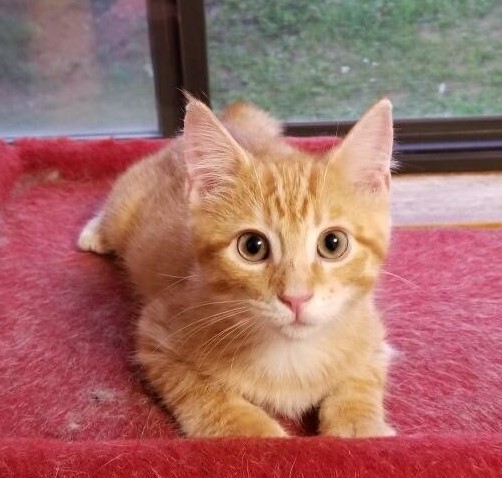 Your support saves the lives of cats and kittens with ringworm so they can find their homes and make their families whole.

Your generous support of Dane County Humane Society enables the Maddie’s Felines in Treatment Center (F.I.T. Center) to care for and treat cats and kittens with ringworm. Since its inception in 2003, over 1,000 cats have been admitted and cured of this highly contagious fungus, allowing them to go on to be adopted into loving homes.

One such kitten is Rudolph.

Rudolph was just about three weeks old when he was found alone in a parking lot in June and brought to DCHS. During his initial intake exam, our vets immediately noticed some scabbing on his upper lip. It wasn’t infected and didn’t appear to be painful to the kitten, so we planned to keep an eye on it to make sure it healed. The lesion didn’t glow with our special lamp that shows ringworm spores, so we sent Rudolph home with a foster mom because he was too young to be adopted.

However, within just a few days, Rudolph’s foster mom noticed the lesions on his face had grown. Our vets ran some additional tests, and confirmed Rudolph had ringworm.

Ringworm is a highly contagious fungus that can be transmitted across species, including to dogs and humans. Because of this, many shelters are still not equipped to contain and treat the disease. It’s usually considered untreatable in a shelter setting, and frequently results in euthanasia for cats like Rudolph. But in 2003, DCHS started a program that would change everything.

The program started inside a pink 1960s-era trailer with Karen Moriello, DVM, DACVD, Sandra Newbury, DVM, and an incredible group of volunteers. Since that time, the F.I.T. Program has expanded to help sick cats at DCHS and assist other shelters and rescues unable to provide this care themselves. 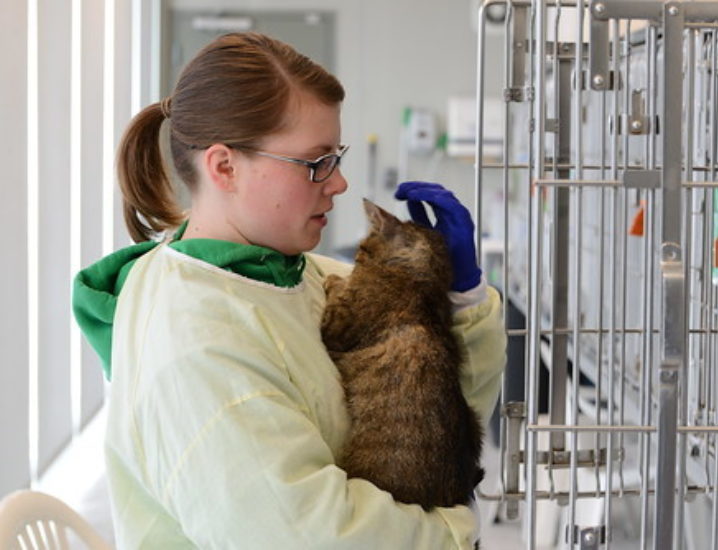 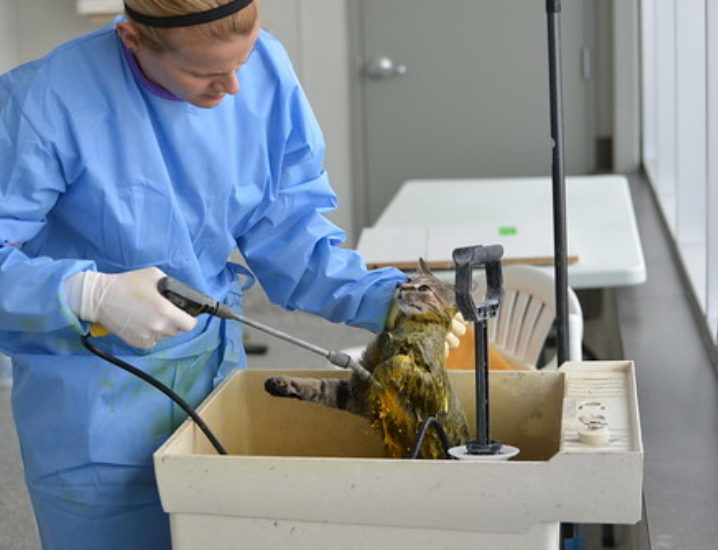 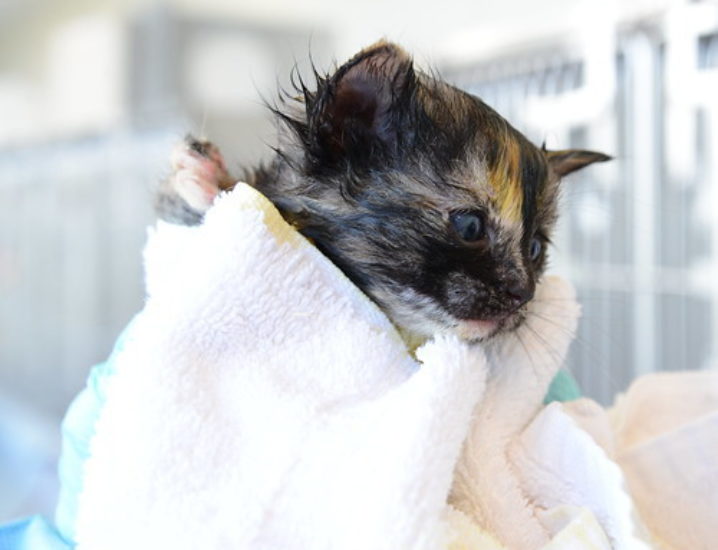 In 2010, DCHS built a permanent structure to house the F.I.T. Program with the help of a generous matching grant from Maddie’s Fund and donor support. Maddie's Felines in Treatment Center is a 2,000-square-foot facility that serves as a quarantine zone completely isolated from the available animal population.

This is where we moved Rudolph once we confirmed he had ringworm. This building has its own HVAC, hot water, and electrical systems, as well as its own team of volunteers. These precautions ensure ringworm doesn’t make its way to our general animal population. Here, Rudolph had a spacious condo to sleep and play in with a great view out big picture windows.

Treatment for ringworm can last anywhere from 45 to 70 days. Cats in treatment receive oral anti-fungal medications and get twice-weekly lime-sulfur dips. They are considered cured when they show two negative fungal cultures in a row. Rudolph’s treatment lasted about a month.

While he lived in the F.I.T. Center to receive his ringworm treatment, Rudolph met long-time F.I.T. and adoption volunteer Linda. She helped with his ringworm treatment, and quickly fell in love with this goofy little guy. As soon as he was healthy enough to be adopted, she took him home to meet his new sister, Clarice (also a DCHS alum!). Linda adopted Clarice earlier this year, and she knew Clarice would want a friend.

Although Clarice was initially skeptical of her new little brother, they became fast friends. Now, they play together until they tire each other out and snooze together until they’re rested enough to play again. It’s a perfect fit! 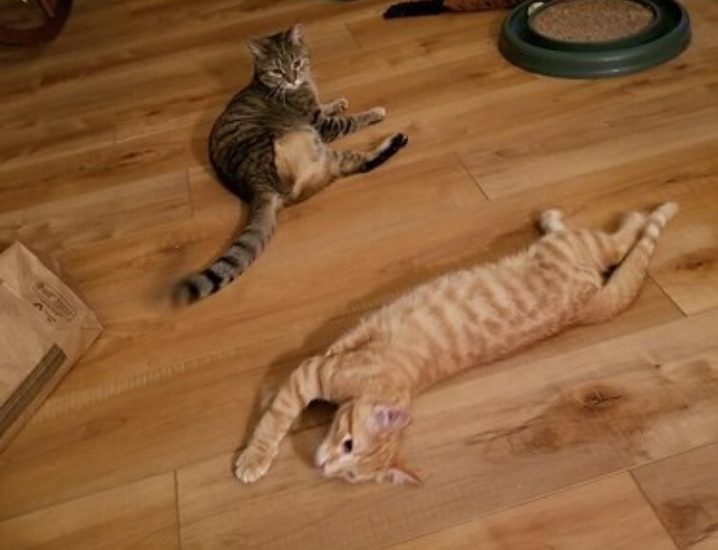 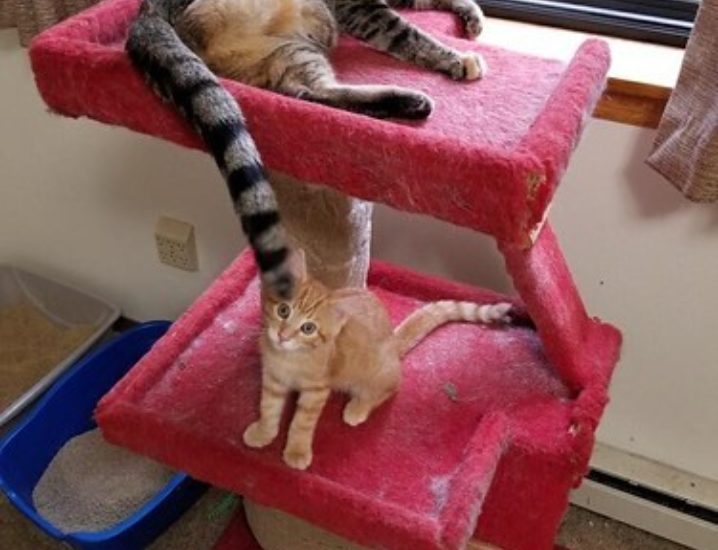 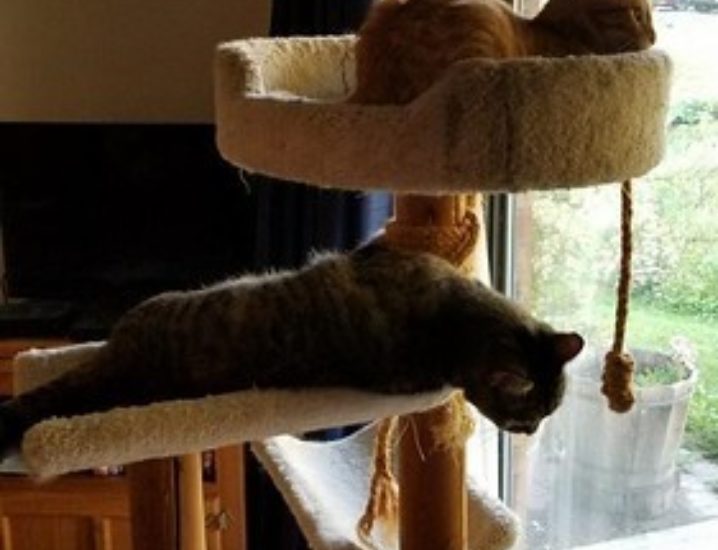 Your support helps heal cats and kittens with ringworm so they can find their homes and make their families whole.

When you donate Saturday November 27th through #GivingTuesday on November 30th, your gift has DOUBLE the impact thanks to our generous matching gifts. Thank you for donating and saving the lives of cats and kittens with ringworm.

Thank you for your generosity and patience! Due to all the support of DCHS this Giving Tuesday, our donation form below may take a minute or two to load.