A Hummingbird in Winter 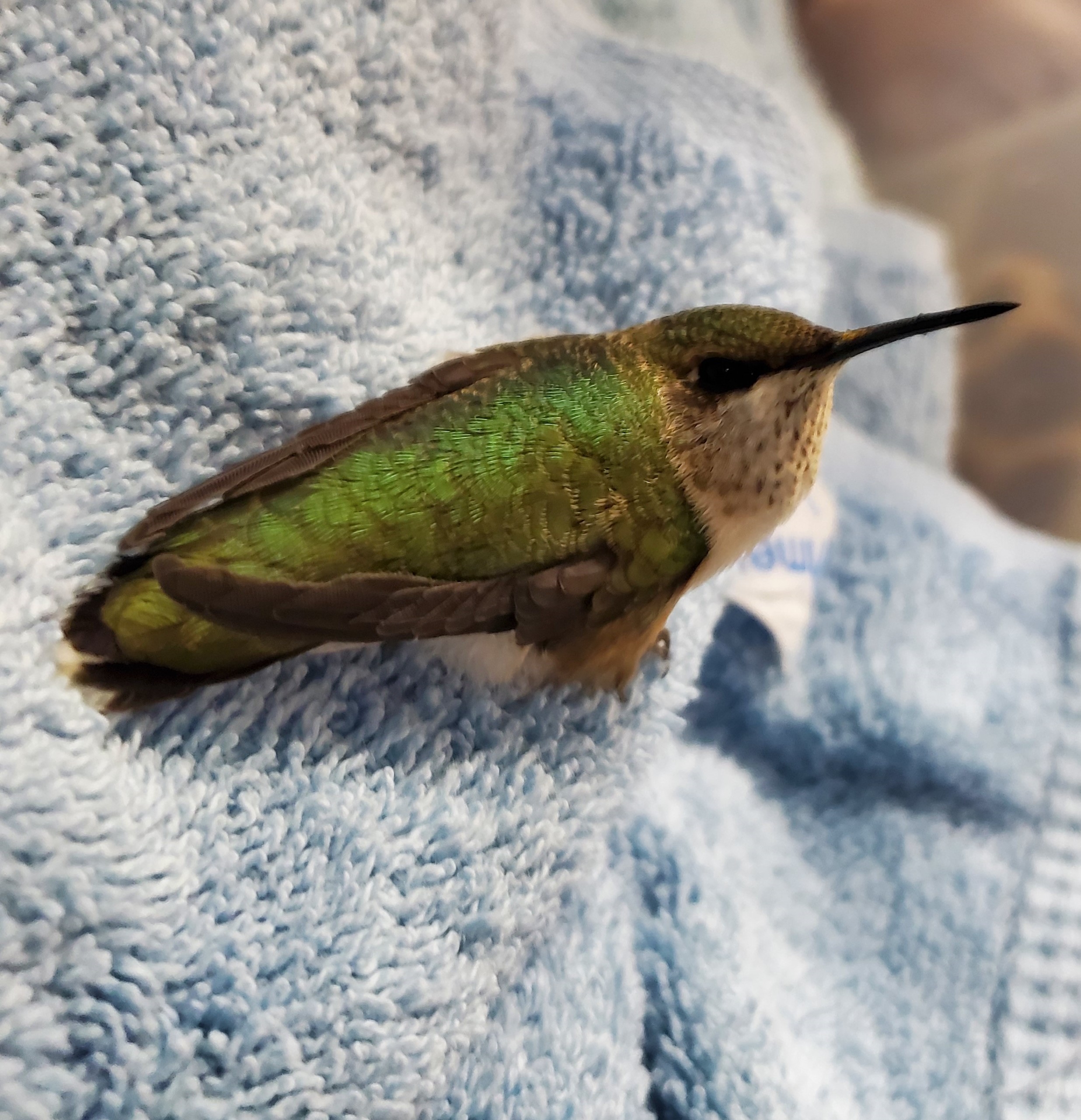 Have you ever wondered what it’s like for Dane County Humane Society (DCHS)'s Wildlife Center staff to evaluate a new patient and determine when it has fully recovered?

From admission to release, rehabilitators consistently make patient observations and note changes in behavior, attitude, progress, and so much more. The case of our over-wintering ruby-throated hummingbird (RTHU #21-2258) is an excellent one to highlight positive progress through months of treatment.

Paige Pederson, Wildlife Operations Supervisor at DCHS’s Wildlife Center, examined this bird on intake on September 18, 2021. This juvenile male hummingbird experienced severe physical head trauma symptoms after hitting a window. Paige assessed him for respiratory and neurological abnormalities, as well as his physical capabilities before writing up an assessment and treatment plan. She wrote he retained flight ability, but only in an abnormal circling pattern. She also noted poor muscle control when the hummingbird was moving; the hummingbird was able to gain elevation well, but tired quickly.

Paige determined the hummingbird's prognosis was fair and treatment should include pain medication and a few hours of oxygen therapy. His neurological symptoms should be rechecked every two days.

By September 25th, 2021, staff noticed small improvements in the hummingbird’s condition, but they believed this bird would require a much longer time in rehabilitation in order to fully recover.

Below are some notes staff recorded since the bird's September admission:

Licensed rehabilitator Nicki Leon recorded in a staff recheck regarding his neurological symptoms: Ruby-throated hummingbird is still circling to the left (sometimes flying in a circle). Bird seemed to have trouble finding the syringe (of nectar) sometimes and squints his left eye; there are possibly vision changes on the left side that may be leading to his circling, to an extent. Hummingbird flies into the hand of the person holding out the syringe. When circling, sometimes the RTHU drastically drops elevation in flight, which causes him to hit branches or leaves inside cage.

On October 11th, 2021, Wildlife Center Veterinary Technician Erin Lemley wrote that the hummingbird was flying fast and high, and was easily able to avoid capture. In addition to flying, he was self-feeding. However, the bird's feathers were mildly worn on the tips, which may affect his ability to migrate successfully as it is becoming late in the season.

By February 14th, 2022, Jackie Sandberg, Wildlife Program Manager at DCHS's Wildlife Center, reported that the hummingbird was bright, alert, and responsive. He was showing evidence of new tail feathers growing in. "RTHU is thriving and has a good potential for spring release," she wrote.

Now in April 2022, staff observe a constant buzz from the hummingbird habitat in the Sundance Center, as this young male exercises, eats, and gets himself ready for release. Once per day, volunteers bring fresh nectar and water, plus a once-daily “spritz” is performed to help keep the bird in good feather condition so he can take time to preen. Peg Scholtes, one of our dedicated songbird assistant volunteers, says she’s “never seen a bird who likes a shower more than that hummingbird does.”

To give this bird its best chance at success, we will wait to release him until other ruby-throated hummingbirds return to Wisconsin, indicating the start of the northern leg of their migration. Then, he will be out the door to freedom and counted as a resounding success.